Wanda Falbo (Word Fairy) appeared in a series of inserts that first appeared in season 21 of Sesame Street,[1] and continued to be shown through season 38. The storyline of Episode 2951 revolved around her, as she paid a visit to Sesame Street.

The fairy character was a carryover from SCTV, originally named Mrs. Falbo, the hostess of "Mrs. Falbo's Tiny Town". Her segment theme was written by Tony Geiss. 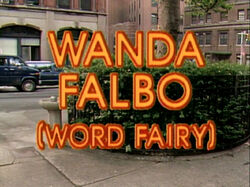