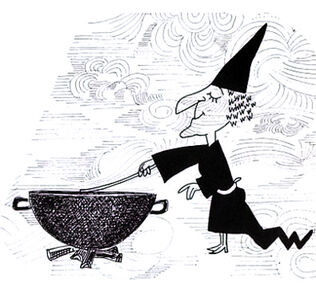 Wanda the Witch is an animated segment on Sesame Street. Premiering in Episode 0001 and shown twice in that episode, the short tells the story of Wanda the Witch, who goes to a well on a windy winter Wednesday to wash her wig, only to have a gust of wind blow it away forever. The moral of the story is that "Witches who wash wigs on windy winter Wednesdays are wacky." Wanda also wore a worm for a belt, and owned a pet weasel.

Sometimes, after the skit was run, a brief sequence had Carol Burnett saying, "Wow, Wanda the Witch is weird." "Lucy in the Sky with Diamonds" ended with an introduction to this segment as well.

The segment was repeated in later seasons, and Wanda the Witch occasionally surfaced in print materials, such as The Sesame Street Learning Kit, The Sesame Street Calendar 1972, and Playskool's Alphabet and Rhyming Match-Ups (where she was rendered with green skin).

Animator Tee Collins designed and animated the cartoon. According to the 1971 book All About Sesame Street by Phyllis Feinstein, Collins approached the short "by repeating the letter W in his sketches as frequently as he does the name of a beer, toothpaste or other produce." Feinstein included further comments on Collin's process:

“He created Wanda by 'thinking W’s and experimenting with the basic shape of the letter to form other objects until finally a character took shape!' 'It was like working from the middle out, I suppose,' says Collins.”

This segment originally appeared in the second test pilot, as well as This Way to Sesame Street, a sneak preview special for Sesame Street.