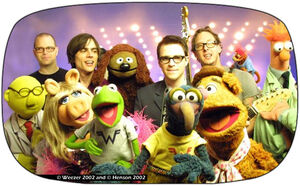 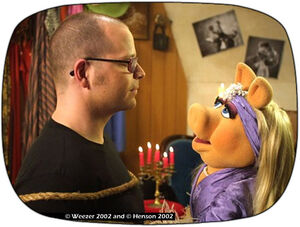 Weezer and the Muppets Go Fishin' was a 21-minute behind the scenes documentary on the making of the Keep Fishin' music video that aired on MTV2 in 2002 and was featured as a streaming video in three parts on Weezer's official website shortly afterwards.

Pepe continues to interview the band, learning that Scott Shriner would lip-synch to the original Muppet Movie album (which prompts Pepe to sing a few bars from Movin' Right Along). Shriner also says how Gonzo was always his favorite, as he sang some very sad and heart-filled song.

A montage of clips on the set are played. Showing Kermit's improving getting Brian Bell to laugh, the band and Muppets jamming to the song, and a penguin upstaging a shot.

Bell talks with Kermit on the set, sharing how meeting the frog was a big moment for him, and how as a kid he had a Kermit birthday cake which was green on the inside (it was mint).

Gonzo and Pepe interview Scott Shriner in the Dressing Room set – asking if his last name is "Weezer" and how good their performances were.

Patrick Wilson talks about working with Miss Piggy (who Pepe calls a camera hog). Outtakes from Piggy and Wilson's scene are shown, along with an interview with Piggy and Wilson and Piggy asserts Wilson and her are "just friends".

After the filming is done, Rowlf the Dog is shown working at the editing console editing the video. He continually wants to insert shots of girls in bikinis (at request of "director" Pepe) despite the real director's wishes. Rowlf doesn't listen, continually putting more bikini shots into the edit. The 150-words uttered by Rowlf (performed by Bill Barretta), marked his first major speaking role after Jim Henson's death.

After Rowlf leaves, the director "fixes" the video just in time for Pepe to come in introduce the debut. The final music video is played, followed by the credits (which include an interview outtake along side – in which Pepe states he is from Spain, and is insulted at the band's implications he might be from the Baltic Sea).

Although the making-of documentary is primarily Muppet focused (only 6 shots don't contain any Muppets), no behind the scenes puppeteering is alluded to. All shots (even the behind the scenes ones) keep the puppeteers out of frame and the characters are treated, and referred to, like real people the entire time.

Retrieved from "https://muppet.fandom.com/wiki/Weezer_and_the_Muppets_Go_Fishin%27?oldid=1102772"
Community content is available under CC-BY-SA unless otherwise noted.