"Wet Paint" is a song from Sesame Street, performed by How Now Brown and the Moo Wave. The song describes what wet paint is and how it is properly used.

The music video is introduced by an SMV (Sesame Music Video) Hot Pink Anything Muppet VJ (performed by Fran Brill), who explains the band's backstory. The video features chroma-keyed background footage of paint continually splashing and dripping on solid white and blue back drops. It also features How Now Brown's feet in red galoshes dancing on a paint-smeared yellow tarp. By the end of the song, How Now Brown (wearing a chroma-keyed vest) becomes obsessed with wet paint, which begins to coat the screen as it slowly melts away (including the MTV-style captions). 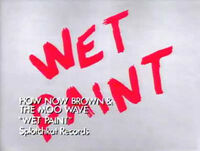 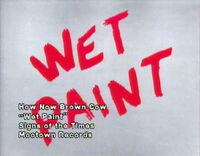 MTV captions from Count It Higher (Mootown Records).
Add a photo to this gallery

Retrieved from "https://muppet.fandom.com/wiki/Wet_Paint_(Cerf/Stone)?oldid=1299816"
Community content is available under CC-BY-SA unless otherwise noted.