Kermit tried to sing the standard song "What Kind of Fool Am I?" from the musical Stop the World - I Want to Get Off, in an appearance on The Ed Sullivan Show on May 31, 1970. He accompanied himself on piano, but was repeatedly interrupted by Grover.

A clip from this performance (shown in black-and-white) appeared in the documentary Henson's Place.

Kermit later performed a variant of the song, "What Kind of Frog Am I?", on a 1977 appearance on Dinah! 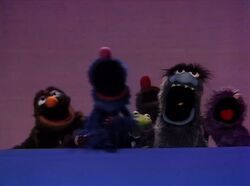 A rare color image of the sketch.
Add a photo to this gallery

Retrieved from "https://muppet.fandom.com/wiki/What_Kind_of_Fool_Am_I%3F?oldid=1102872"
Community content is available under CC-BY-SA unless otherwise noted.