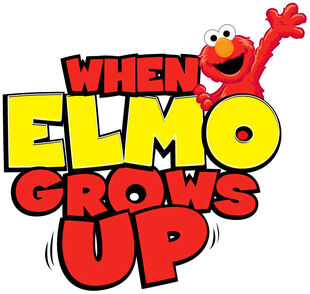 When Elmo Grows Up is a Sesame Street Live show which premiered in 2007. This show is now touring.

The Sesame Street gang tackles the question of what they want to be when you grow up as they prepare for a pageant on Sesame Street. Bert dreams of becoming a park ranger, Telly Monster longs to be a cowboy and Abby Cadabby wants to be a Fairy Godmother just like her mommy. Elmo thinks about becoming a weather monster, but in the end finds he wants to be anything and everything.

This is the first show to introduce Abby Cadabby to the Sesame Street Live stage.

A revamped version of the When I Grow Up tour from 13 years prior to this show's premiere, several changes were added. For instance, while the original story opened with just Big Bird, Elmo is also seen in the show's opening song. The stage is redesigned, dropping the original stage with giant hats, and such etc. Roxy Marie and Grungetta are changed to the show's understudies, while Betty Lou, who appeared in the original, is missing all together. Most of Roxy and Grungetta's dialogue are redone with Abby, Zoe, and Rosita.

Several of the Muppet occupations are also changed. Elmo is changed from cowboy to a weather-monster, while Telly fills the cowboy position. To keep the show updated for the modern audience, a notable change has Baby Bear as the train engineer instead of Roxy Marie, who wore the hat in the original. One of the most notable changes was Cookie Monster's scene, who is transformed from a chef to a firefighter. The firefighter scene is in fact recycled from another Sesame Street Live show, Let's Play School, from 1990.

Retrieved from "https://muppet.fandom.com/wiki/When_Elmo_Grows_Up?oldid=1208258"
Community content is available under CC-BY-SA unless otherwise noted.