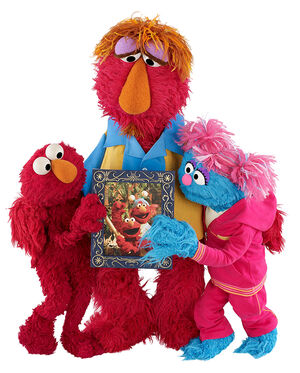 When Families Grieve is a continuation of Sesame Workshop's Talk, Listen, Connect initiative that provides resources and emotional support to military families. The hour-long primetime television special features Katie Couric and the Sesame Street Muppets. The special presents personal stories about families coping with the death of a parent, as well as strategies that have helped these families move forward. The special features newly recorded interview segments with the Muppet characters, as well as clips from the similarly named outreach video.

The special aired on PBS on April 14, 2010 in conjunction with the Month of the Military Child, and it's part of a multimedia, bi-lingual (English and Spanish) outreach kit for national distribution immediately following the airing.

All materials became available at Sesameworkshop.org on April 15th.

It was nominated for "Outstanding Children's Nonfiction Program" at the 2010 Primetime Emmy Awards, losing to its only competitor, Nick News With Linda Ellerbee - The Face Of Courage: Kids Living With Cancer.

The full special is available for download in the iTunes Store through the Sesame Street in Communities podcast.

Retrieved from "https://muppet.fandom.com/wiki/When_Families_Grieve_(special)?oldid=1287475"
Community content is available under CC-BY-SA unless otherwise noted.