When Oscar Was a Little Grouch and Other Good-Night Stories is a 1989 Sesame Street storybook that contains three stories:

Oscar babysits for his niece Filthomena and tells her about his childhood, including the first trashcan which he wore to kindergrouchen.

In the Twiddlebug community in Elmo's windowbox (which is also populated by several worms), Mayor Thaddeus Twiddlebug proposes the construction of a playground for the children. The project moves along smoothly until Tina Twiddlebug (no relation) says she wants a jungle gym for her son Timmy. The notion is greeted simultaneously with approval and confusion, since none of them know what to use for a jungle gym. Tina's next proposal is unprecedented: she will fly into the big wide world (an attempt seldom attempted by Twiddlebugs) to find one. An intimated Tina flies cautiously around Elmo's room, appraising different objects, before finally selecting a stray piece from Elmo's set of jacks. Tina is proclaimed a hero and Mayor Thaddeus gives her a medal.

An exhausted Bert only wants to sleep, but Ernie keeps him awake with imaginative contemplation, jokes (and going "Boh-dee-oh-doh" up his own knees), and a simulated earthquake. Bert finally has to use Ernie's own techniques to achieve blissful slumber.

The three stories were reprinted in a 2017 collection, 5-Minute Stories. 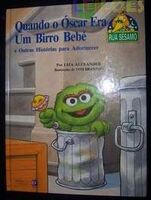