Where the Wild Things Are is a theatrical adaptation of Maurice Sendak's classic children's book of the same name. Jim Henson's Creature Shop provided the giant creatures featured in the film. The film was released on October 16, 2009 by Warner Bros. Producers included Tom Hanks and Maurice Sendak.

The film follows the imaginary adventures of a young boy named Max (Max Records), who is angry when his mother Connie (Catherine Keener) invites her boyfriend (Mark Ruffalo) over. After one mischievous antic after another, his mother tries to send him to his room. Max ends up biting her and running away, feeling angry and unloved. He runs outside at night, through a fence until he stumbles upon a boat. He sails away to an island inhabited by seven imaginary monsters called the Wild Things, where they crown him as the ruler. Throughout Max's stay on the island, he and the wild things participate in an extraordinary adventure.

The Jim Henson Company's Creature Shop in Los Angeles refined the designs and built the enormous costumes for the Wild Things. Creation of the costumes took place over a six-month period, after which they were shipped to Australia where Sydney-based Dave Elsey and an Australian team of costumers continued with on-site adjustments and reconfigurations to meet the unique demands of location shooting.

“We scanned the maquette, then enlarged the head to actual size and modeled that in foam, covered with clay. We re-sculpted the body of the maquette without fur, and were left with the understructure. Then we enlarged the pattern off the maquette and cut it out of foam. Within a week, we managed to get the basic shape and size of the character. We tried to transfer most of the weight of the costume to the hips of the performer. Basically, we approached the project as if these were huge puppets that were going to be puppeteered from inside, as opposed to thinking of them as huge costumes.[1]”

The costumes were hand-dirtied before each day's shoot. The crew collected buckets of natural material from each location so the correct debris could be thrown on the costume for that day’s scenes. Each night, the inside of each costume was sprayed down with vodka to disinfect it.[2]

The primary actors who inhabited the suits had no prior experience as costumed performers. They trained for weeks to learn how to move in costumes weighing up to 150 pounds. The temperature inside a suit could rise to more than 100 degrees; a small fan was positioned to blow air through the costume's mouth between takes. Sonny Gerasimowicz (designer of the Wild Things and body suit performer of Alexander) stated that "Someone passed out at one point, but you couldn't really tell. They'd just slump over like three degrees to the left, the suit was so heavy."[2] The inside of the Wild Things' heads contained small TV monitors that displayed what the camera was seeing (similar to Gorgs eye vision).

Outside of the Creature Shop, due to limitations of the animatronic mouths, the Wild Things' facial expressions and lip-sync were enhanced in post-production with computer animationscenes. Animation and visual effects supervisor Daniel Jeannette and CG studio Framestore handled those elements. 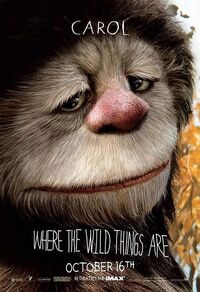 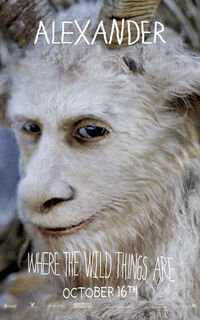 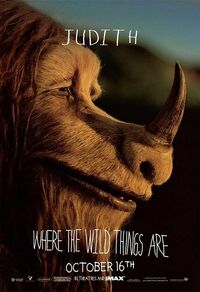 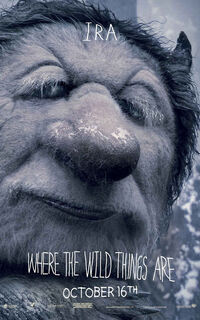 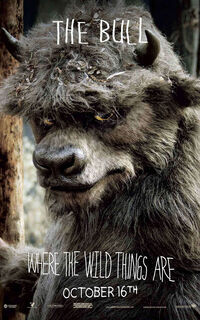 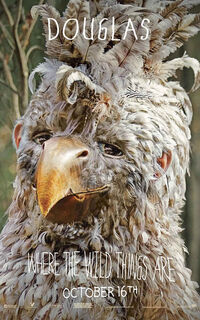 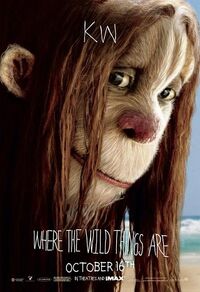 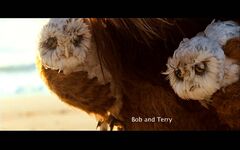 Bob & Terry
Add a photo to this gallery

Retrieved from "https://muppet.fandom.com/wiki/Where_the_Wild_Things_Are_(film)?oldid=1119993"
Community content is available under CC-BY-SA unless otherwise noted.