Who's Who on Sesame Street

Who's Who on Sesame Street is a Sesame Street coloring book featuring portraits of both human cast members and Muppets. The first edition was published in 1977, with subsequent new releases every few years.

Most pages devote an entire page to either a single character or a group, with their name spelled inside an outline of the Sesame Street street sign placed at the bottom of the portrait. Other pages feature characters in various situations, or activity pages. Since the Sesame Street cast is always changing (and due to the large amount of featured characters), the coloring book has been published several times, adding new characters and dropping others. 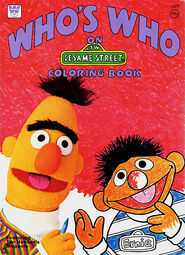 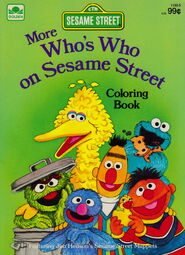 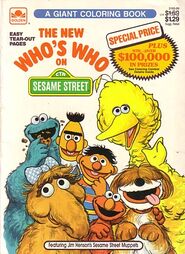 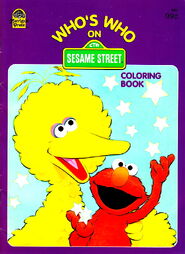 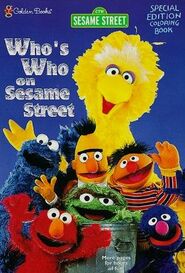 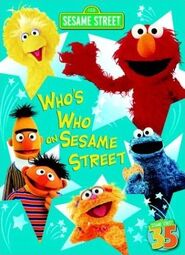 Five years after the original book was released, a completely new version was created. Titled More Who's Who on Sesame Street, this book did not feature illustrations by Joe Mathieu, but by Mary Grace Eubank. The book also adapted the same format as the previous release, but with a different design; each picture is made to look like a photograph, with a rectangular name plate at the bottom of each picture. Pictures of the characters in various situations (such as The Count appearing on "The Counting Game" show with Guy Smiley, or Warren Wolf interviewing astronaut Grover) are also interspersed throughout the book.

Following the death of Will Lee in 1982, a re-release of the book omits Mr. Hooper's page, as well as the following characters: Poco Loco, The Salesman, The Busby Twins, Bruno, Clementine, and Forgetful Jones.

The 1989 edition, renamed The New Who's Who on Sesame Street, is also illustrated by Joe Mathieu and recycles many images used in the first edition. Some of the character's pages are redone to reflect the cast ages and Muppet's designs. (For example, Big Bird's original illustration featured the bird with a somewhat trapezoid-shaped head of feathers; the redrawn version gives Big Bird a more rounded head.)

Images carried over from the first edition are of: Bert, the Ernie/Bert drum page, Snuffle-Upagus, Grover, Grover in his airplane, Mumford, Mumford's levitation act with Grover, the Twiddlebugs, Rodeo Rosie, Simon the Sound Man, Don Music, Chris and the Alphabeats, Prince Charming and Lance, Cookie Monster, the Cookie/Ernie/Bert page spread, Biff and Sully, Herry, Herry and Prairie on a see-saw, Monsters and More Monsters, the Martians, Prairie Dawn, Betty Lou, Anything Muppets, the Now, Make Your Own Muppets!" page, Little Jerry and the Monotones, Guy Smiley hosting "What's My Part?", Sam, The Count, the Count counting bats, Oscar, Oscar with the Mudman, the three group pages, and the "Draw your favorite Muppet" page with Ernie.

This version makes no reference to past books (adapting the original title), but continues to use Joe Mathieu's illustrations, as well as new character pages illustrated by Jowill Woodman. Many were based on a 25th season promotion featuring the then-current cast and Muppets. For all characters, the nameplates all feature printed names mimicking a handwritten font (previous nameplates were written out by Mathieu).

New and revised images by Woodman are of:

Oddly, character pages for Gordon, Miles, and Baby Bear, all of whom are main characters, are left out.

An interesting motif used in the middle of the book is a series of pages made to look like a scrapbook titled “My Photo Album: Old Friends”. This brief passage focuses on characters that sporadically appear on the show or have been retired. The section uses Mathieu’s illustrations, with all images made to resemble photographs.

New images are of:

To coincide with the show's 35th anniversary, this recent edition features cutout puppets featured on the back cover.

Who's Who on Sesame Street
Chris Angelili
Random House
2000
Community content is available under CC-BY-SA unless otherwise noted.
Advertisement