William Shatner (b. 1931) is a Canadian-born actor and author undoubtedly best known for his role as Captain James T. Kirk in the original Star Trek series.

He appeared on Muppets Tonight in episode 109 in a cameo appearance with Miss Piggy on an airplane, re-enacting a scene from his best known of two appearances on the original Twilight Zone. The scene also referenced his 1996 book Man o' War, which Piggy is reading. Shatner asks if she wants him to autograph the book, making it out to Babe.

In September 2015, Shatner commented on a CNN article reporting on Kermit the Frog's new girlfriend, Denise: "Wow! How much did this cost? BTW, is Miss Piggy available? #toosoon?" [1] The tweet generated a reply from Miss Piggy: "Very much available, mon cher. Gimme a call! I'd love to boldly go where no pig has gone before." [2] and Bill Prady: "Bill, as an Executive Producer of @TheMuppetsABC, I can officially tell you that @MissPiggy is “playing the field.”" [3]

Shatner's portrayal of Captain Kirk has often been parodied by the Muppets, but perhaps none so specifically to his acting style as Cap-ten Kirk in Sesame Street Episode 4504. 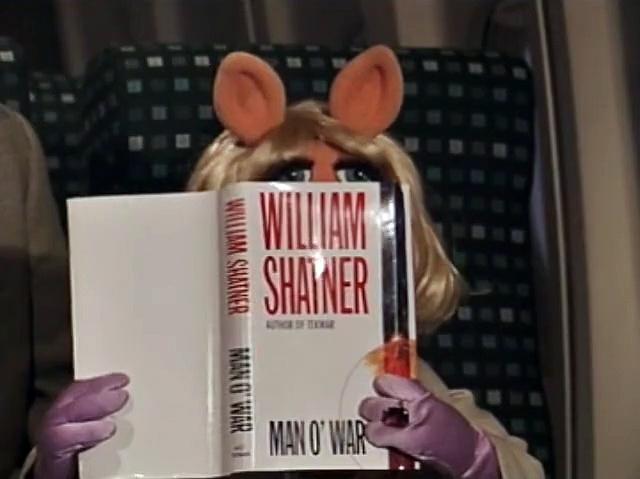 Wikipedia has an article related to:
William Shatner
Retrieved from "https://muppet.fandom.com/wiki/William_Shatner?oldid=1079555"
Community content is available under CC-BY-SA unless otherwise noted.