Willie Wimple is a careless youth who appeared in Sesame Street animated inserts beginning in 1972. Through a jaunty song, Willie would routinely throw garbage, chop down trees, and leak oil into the waters. The chorus always pointed out how "if every kid did it, can't you see what an icky, messy, no-fun world it would be (yuck)," typically ending with a shot of a ruined earth. Willie's purpose was to demonstrate how one person's actions can harm the planet, since in fact individuals are seldom alone in their waste.

Veteran animator Abe Levitow directed the segments, as one of his last projects, and co-wrote the song with Dave Hanson. Steve Hoffman provided the singing vocals for the pieces.[1]

The cartoons were referenced in Episode 4202, where Chris and Elmo hum the song as they arrive at their campsite. 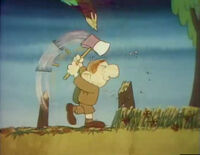 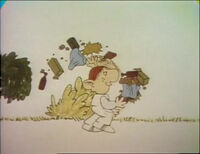 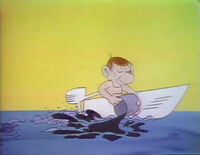