Willy was the hot dog vendor on Sesame Street, appearing sporadically between the 1970s and the early 1990s.

Willy served mostly as a background character, interacting with the cast minimally from time to time. He appeared unnamed as early as episodes 0090, 0122, and 0124 (where Gordon calls him the "old man down the street"). He's seen first pushing the hot dog cart in Episode 0131, and Bob refers to the owner of the cart as "Mr. O'Brien" in Episode 0136. The earliest known use of his permanent name was in Episode 0406. He also featured in Follow That Bird amongst the street residents. 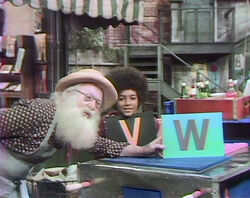