The Willy Muppet is a caricature of Muppet designer Kermit Love. He more closely resembles Love's Sesame Street character Willy. He was originally seen in a season seven edition of "The People in Your Neighborhood," singing to Bob about his job as a hot dog vendor. Frank Oz performed the character here.

A refined version of the caricature was used a few times the following season. In a sketch with Grover, he passes a ONE WAY sign with a food cart. He also appeared in "Bus Stop," waiting for the bus, and during the song "I Love a March." 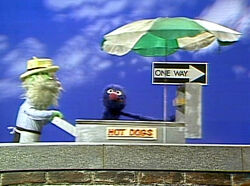 Pushing his hot dog cart
Add a photo to this gallery
Retrieved from "https://muppet.fandom.com/wiki/Willy_Muppet?oldid=1197671"
Community content is available under CC-BY-SA unless otherwise noted.