A version of the song was sung by Tony and Beautiful Day Monster in the first season of Sesame Street. Tony sings about his girlfriend, Windy, who can fly across the sky. The monster injures herself at the end of the song, which ends with a huge crash.

“The first job I had was for a song called "Windy." They wanted a big crash at the end.

In those days, we didn't have electronic equipment buttons we could push. So I went and got all the stagehands, and we made this big pile of crap in the middle of the stage. And at the right point, I threw myself at the pile and smashed it all over the floor.

Everybody was in the control room, including Jon and Joan. And Jon says, "We gotta do that one more time." We build the pile again, and the song came around, and, bang, I threw myself at it.

Jon said, "We need to do this one more time," and I realized at that point that the actors weren't even acting, the camera had been turned on me, and they're all in the control room laughing their asses off at this young kid throwing himself into this big pile of garbage to make this crash.[1]”

Tony and the Monster also performed another duet during Sesame Street's first season, "Lulu's Back in Town". 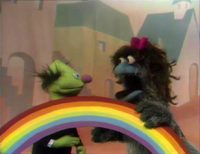 "Who's bending down to give me a rainbow..." 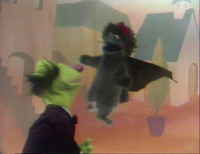 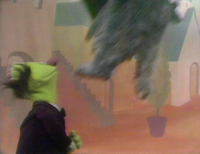 Wikipedia has an article related to:
Windy