Winnie Wiggins, often addressed as Mrs. Wiggins, made a few appearances on Sesame Street during the 1970s. She was superintendent of some of the buildings on Sesame Street, including 123 Sesame Street. Her favorite pastime was finding which letters began specific words and peppered her speech with them (i.e. "D for Dandy").

She also contributed a recipe to The Sesame Street Cookbook called "Mrs. Wiggins' Alpha Betty" (which her mother used to make). It's a dessert she serves to Grover made with applesauce, graham cracker crumbs, and alphabet breakfast cereal. 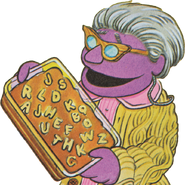 The Sesame Street Cookbook
Add a photo to this gallery
Retrieved from "https://muppet.fandom.com/wiki/Winnie_Wiggins?oldid=1333177"
Community content is available under CC-BY-SA unless otherwise noted.