Winny was introduced in the fourth season of The Muppet Show, replacing Gladys as the provider of food services (beyond The Swedish Chef's abilities).

She was loosely based on one of the real cafeteria ladies who worked on the show, but only made two appearances: one in episode 408 where she's involved in preparing a feast, and a background cameo in episode 410.

She also appeared in the background for a sketch in the 1980 television special Because We Care as part of the ensemble performing "Sing".

The puppet later resurfaced, briefly, in Muppet Treasure Island, and was later used on Mopatop's Shop where she was renamed Claudia Bird. 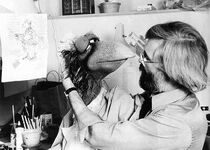 Michael Frith with the puppet... 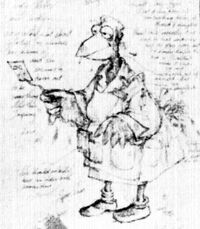 ...and his sketch of the character 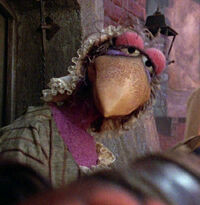