Winny was introduced in the fourth season of The Muppet Show, replacing Gladys. Winny was loosely based on one of the real cafeteria ladies who worked on the show, but only made two appearances, in episode 408 and a background cameo in episode 410. The puppet later resurfaced, briefly, in Muppet Treasure Island.

The Winny puppet was later used on Mopatop's Shop, where she was renamed Claudia Bird. 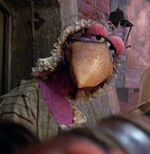 Muppet Treasure Island
Add a photo to this gallery
Retrieved from "https://muppet.fandom.com/wiki/Winny?oldid=1103116"
Community content is available under CC-BY-SA unless otherwise noted.