"Wipe Out" is a 1962 song first recorded by the Surfaris, who were elevated to international status with the release of the "Surfer Joe" single, with "Wipe Out" as the B-side.

The song was performed by Animal, on the 1993 Muppet Beach Party album. Animal's version was also released as a single. In the UK the single reached number 39 in the UK charts. "The Muppet Show Theme" was the B-Side and the CD also included "Mah Na Mah Na." It was released on cassette and a Limited Edition 7" vinyl picture disc. BMG mailed out a postcard to advertise the release and a poster was also printed for in store advertising.

The image was also printed on a T-Shirt in the UK by Black Cat Communications. .

A music video was produced and broadcast on VH1 and Nickelodeon, with Animal rocking out over old footage from 1960s beach movies. The song was also used in the Sesame Street Live show, 1-2-3 Imagine!. 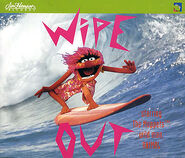 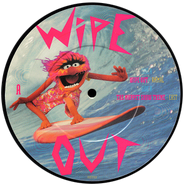 UK CD, Cassette, 7" vinyl picture disc, mail out postcard and advertising poster
Add a photo to this gallery
Retrieved from "https://muppet.fandom.com/wiki/Wipe_Out?oldid=1143864"
Community content is available under CC-BY-SA unless otherwise noted.