The World Trade Center was a complex of seven buildings in downtown New York City. The most prominent aspect were a pair of buildings known as the "Twin Towers," which were once the tallest buildings in the world.

The complex was destroyed in the attacks taking place on September 11, 2001, but has since been rebuilt with new buildings and a memorial to those lost.

Response to the attacks

Following the attacks on September 11, 2001, two shows in production at the time — Sesame Street and Bear in the Big Blue House — took responsibility in helping children cope with feelings brought up in the aftermath, both in an indirect manner.

Sesame Street’s 33rd season was already in production at the time of the attacks and it was decided among the creative staff that the four remaining episodes (which had yet to be written) should tackle issues related to the event.[7]

“We felt we needed to do something in response to 9/11, but we knew we had to be very careful, because our viewers are so young, and parents are returning to educational programming as a safe haven for kids.”
—Rosemarie Truglio[8]

The season premiere, Episode 3981, indirectly referenced the events by having Hooper's Store catch fire and showing how the event affects Elmo, the audience surrogate. The episode featured real New York City firefighters and their fire station and was dedicated to the memory of Lt. Robert Nagel, who died as a first responder the morning of September 11th. The three remaining episodes of the season tackled topics related to the attacks, including prejudice (Episode 4021), loss (Episode 4026), and bullying (Episode 4029).[7]

In a similar fashion, the team behind Bear in the Big Blue House responded to the attacks with their two-part, season four premiere, "Welcome to Woodland Valley." In the episodes, a falling tree damages the Woodland Valley Library. The episode's themes are about coping with destruction and a community comes together in times of crisis.

The Jim Henson Company postponed the MuppetFest! event originally scheduled to occur September 22-23, 2001 in response to the tragedy and concerns regarding travel. In a statement released on September 14th, Henson Company CEO Charles Rivkin stated: "Our sympathies and prayers are with our country, as well as the friends, families and colleagues of the thousands of people who have been affected by this tragedy. In light of this week’s terrible event, we determined that postponing MuppetFest! is the right course of action."[9] One month later, on October 11th, it was announced that the event would be held December 8-9, 2001 in Pasadena, California.

In It's a Very Merry Muppet Christmas Movie, The Boss is seen drinking out of a "I Love New York More Than Ever" mug, an updated version of the "I Love New York" campaign slogan in response to the attacks.

Following the attacks, certain Sesame material directly referencing the Twin Towers were altered or removed from subsequent airings or releases. 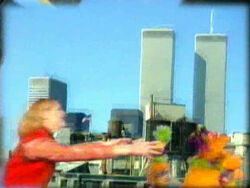 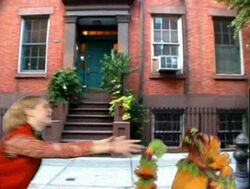