Yahtzee is a dice game made by Milton Bradley (now owned by Hasbro), which was first marketed by game entrepreneur Edwin S. Lowe in 1956. The game is a development of earlier dice games, such as "Yacht" and Generala. The object of the game is to score the most points by rolling five dice to make certain combinations.

Licensed game company USAopoly released a "Muppets Collector's Edition" version of Yahtzee in August 2010. In the Muppet version, the dice shaker is in the shape of Kermit the Frog's head, and the dice feature photos of Muppet characters, including Kermit, Miss Piggy, Fozzie Bear, Gonzo, Animal and the Swedish Chef.[1] At the same time, USAopoly released a new version of Monopoly: The Muppets Collector's Edition. 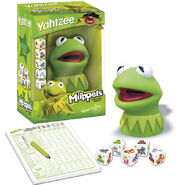 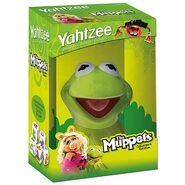 Photoshopped prototype of packing.
Add a photo to this gallery

Retrieved from "https://muppet.fandom.com/wiki/Yahtzee?oldid=1106637"
Community content is available under CC-BY-SA unless otherwise noted.