Yankee Stadium, located in the Bronx in New York City, is the ballpark which serves as home stadium to the New York Yankees baseball team. The new Yankee Stadium opened on April 2, 2009, replacing the old stadium, which was built in 1923. The original stadium was often referred to as "The House that Ruth Built." 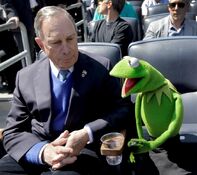 Bloomberg and Kermit at the new Yankee Stadium, 2012 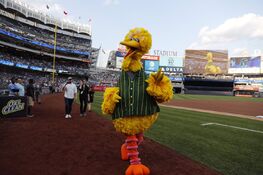 Big Bird waves to the crowd on the field of Yankee Stadium, 2019
Add a photo to this gallery
Wikipedia has an article related to:
Yankee Stadium
Retrieved from "https://muppet.fandom.com/wiki/Yankee_Stadium?oldid=1179414"
Community content is available under CC-BY-SA unless otherwise noted.