Yes, I Can is a direct-to-video series starring Kermit the Frog and Robin, framing episodes of Muppet Babies. Released in 1995 under the "Jim Henson's Preschool Collection" line, each video features an original story with Kermit and Robin, as well as two episodes from the cartoon. In the framing material, Robin is seen struggling with an ethical problem of some kind while Kermit provides guidance for him, using the episodes as visual anecdotes.

Yes, I Can Be a Friend

Yes, I Can Help

Yes, I Can Learn 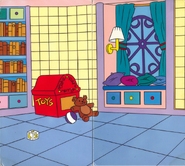