Yolanda Rat first appeared in The Muppets Take Manhattan as one of several rats befriended by Rizzo. She appeared sporadically over the years, until taking on a regular role as Kermit's assistant in ABC's The Muppets.

In The Muppets Take Manhattan, she and her rat compatriots apply for jobs at Pete's Luncheonette. As the only girl among the group, Rizzo frequently makes unwanted passes at her. She gets the job working in the kitchen at Pete's, and helps Kermit with his whispering campaign to sell Manhattan Melodies. Although she and Rizzo don't develop much of an agreeable relationship on screen, they appear to have grown close by the Wedding Finale. 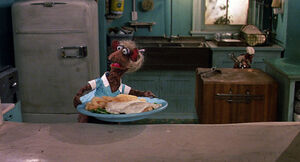 Retrieved from "https://muppet.fandom.com/wiki/Yolanda_Rat?oldid=833531"
Community content is available under CC-BY-SA unless otherwise noted.