"You Do Something to Me," from Cole Porter's musical Fifty Million Frenchmen, is a love song that defines attraction as a mysterious, almost magical, experience. The song, which references hypnotization, spells, and voodoo, was performed twice on the first season of The Muppet Show, both times in a magical setting.

"You Do Something to Me" was first performed in a Wayne and Wanda sketch in episode 108. Wanda sang to Wayne as he attempted to saw her in half as part of a magic trick.

The song is also performed in episode 112 by a pink creature as Svengali magically transforms her into a variety of different creatures, all with the same pink head. 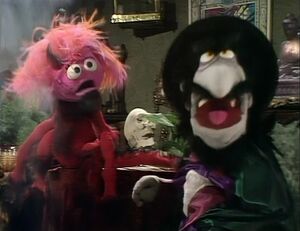 Svengali and his assistant
Add a photo to this gallery

Wikipedia has an article related to:
You Do Something to Me
Retrieved from "https://muppet.fandom.com/wiki/You_Do_Something_to_Me?oldid=1103349"
Community content is available under CC-BY-SA unless otherwise noted.