"Your Feet's Too Big" is a 1936 jazz song popularized by Fats Waller. The song was performed by two Muppet monsters with very large feet in episode 423 of The Muppet Show.

The male pink monster on the left (performed by Jerry Nelson) would later appear in episode 103 of The Jim Henson Hour (where he was performed by Gord Robertson), The Ghost of Faffner Hall, and the Cosby Show episode "Cliff's Nightmare."

The female monster on the right (performed by Louise Gold) would later appear in the The Ghost of Faffner Hall episode "Delighting in Sounds," where she was named Tutie.

On Sesame Street, it was sung by a shoe salesman voiced by Kevin Clash, using different lyrics. (First: Episode 3230) 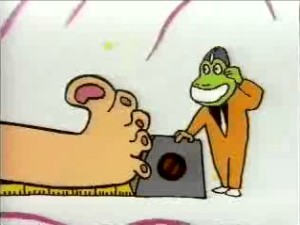 Sesame Street version of the song, animated by Sally Cruikshank.
Add a photo to this gallery

Retrieved from "https://muppet.fandom.com/wiki/Your_Feet%27s_Too_Big?oldid=1103418"
Community content is available under CC-BY-SA unless otherwise noted.