Zachary Levi (b. 1980) is an actor best known for playing the title character on the NBC series Chuck. His other credits include playing Toby Seville in Alvin and the Chipmunks: The Squeakquel, the voice of Flynn Rider in Disney's Tangled, and Fandral in Thor: The Dark World.

Levi appeared in a Word of the Day segment for season 45 of Sesame Street, presenting the word "applause" with Elmo. He then appeared in episode 4702 as "The Kindness Kid." In May 2014, he appeared in "A Lovely Sunny Day" with Bert for Mashable. 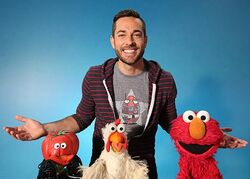 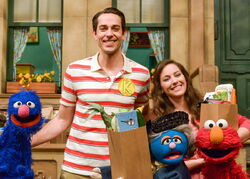 The Kindness Kid in Episode 4702
Add a photo to this gallery
Wikipedia has an article related to:
Zachary Levi
Retrieved from "https://muppet.fandom.com/wiki/Zachary_Levi?oldid=1193694"
Community content is available under CC-BY-SA unless otherwise noted.