Zachary Quinto (b. 1977) is an actor from Pittsburgh, Pennsylvania. His most notable roles include playing Sylar on NBC's Heroes, and Spock in 2009's Star Trek reboot.

Quinto appears in a Word of the Day segment for Sesame Street's 45th season, demonstrating the word "flexible" with Grover. 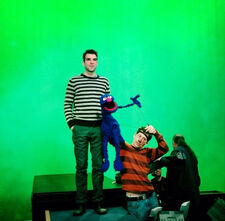 Quinto with Eric Jacobson performing Grover. (also pictured: Tyler Bunch)
Add a photo to this gallery
Wikipedia has an article related to:
Zachary Quinto
Retrieved from "https://muppet.fandom.com/wiki/Zachary_Quinto?oldid=1079641"
Community content is available under CC-BY-SA unless otherwise noted.