Zeliboba (Зелибоба) is a full-bodied character on Ulitsa Sezam, the Russian co-production of Sesame Street. He slightly resembles a hound in some aspects (long muzzle, floppy ears and a keen sense of smell), and always wears a long fuzzy cloak that looks somewhat like a regal mantle decorated with leaves and fluffy catkins. In two episodes of the first season, it was mentioned that he is five years old.

The character was originally created by Ed Christie with a coat of soft brown fur and leaves. When presented to the Russian producers, though, they requested that he be made blue, the color traditionally associated with spirits in Russian culture. 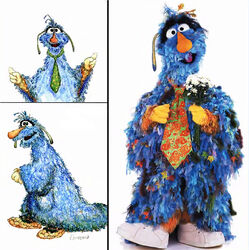 Zeliboba is a tall furry blue spirit who enjoys nature and lives in the hollow of a gigantic oak tree. He is a very large, somewhat awkward, kind-hearted, warm and trusting character. He has an exceptional nose, which he uses to detect smells, moods, the weather, and even music. Whenever he encounters something new, he sniffs it. Zeliboba is a “Dvorovoi” ["Дворовой" - literally "<he> of the yard"] —a spirit of the courtyard. He has his own vision of the world and nature, and sometimes has his head in the clouds. This can get him into funny situations. Zeliboba collects neckties of all types, sizes and colors. He even has a tie museum on Ulitsa Sezam. Birthday: April 19