The series promotes scientific discovery and the characters will try to search answers to questions such as: "Why do birds fly?" or "Why are polar bears white?"

The series was a success in China with 400,000 preschoolers and nearly one million mothers with young children watching in the first two months.[cite] The show won the 2011 Hugo Award for its 'innovative and outstanding' contribution to the world of television.

In 2012, it was announced that there would be a second Chinese-language program, Fun Fun Elmo.

Big Bird has made reference on the show to his grandmother.

Before each episode, there are segments that features Elmo and some children engaging in a science-based craft activity that viewers can do at home. Science-based crafts include creating a bird feeder from a juice carton, making a rain stick, and writing a secret message with lemon juice. These segments are to encouraged children and parents to engage in scientific inquiry and exploration in their everyday lives.

Each episode is triggered by a question that the Muppet characters have when they notice something about the world around them. Within each episode, two live-action films provide in-depth information and real-world visuals. One of these live action films features a hands-on activity that relates to the question raised. A second live action film presents additional information and insight on the topic at hand. These segments are designed to extend the science knowledge and to bring it to life.[1]

At the end of each episode, there is a song that the Muppet characters and children sing relating to the topic of the episode. 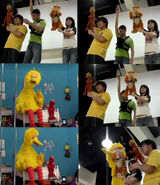 2010 Puppeteer Training in China
Add a photo to this gallery

Retrieved from "https://muppet.fandom.com/wiki/Zhima_Jie:_Da_Niao_Kan_Shijie?oldid=1207298"
Community content is available under CC-BY-SA unless otherwise noted.