Target released a set of Kermit and Miss Piggy plush dolls in 1994 for their Zing Into Spring Promotion. The dolls were made by Hasbro under the Kid Dimension label. (The original versions of the toys were sold the year before.)

Kermit was dressed in blue overalls and a hat, with a "jelly bean" shirt; a small yellow chick was attached to his front pocket. Miss Piggy featured a dress with the same "jelly bean" pattern and a hat.

Each doll came with the Put Some Zing In Your Spring cassette tape featuring four songs. 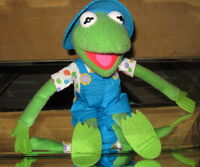 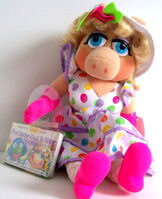 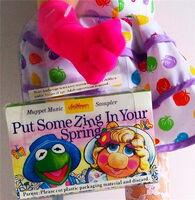 Add a photo to this gallery
Retrieved from "https://muppet.fandom.com/wiki/Zing_Into_Spring_plush?oldid=1103474"
Community content is available under CC-BY-SA unless otherwise noted.