Zooey Deschanel (b. 1980) is an actress who has appeared in the films The Good Girl, Elf and (500) Days of Summer. She also stars on the FOX series New Girl.

Deschanel played Trillian in the 2005 Creature Shop film The Hitchhiker's Guide to the Galaxy. In 2016, she appeared onstage with Kermit the Frog for WE Day.

In April 2018, Deschanel taped two segments of Cookie Monster's Foodie Truck during Sesame Street Season 49. One was released exclusively to YouTube, and the other aired in Episode 4913.

Deschanel in The Hitchhiker's Guide to the Galaxy. 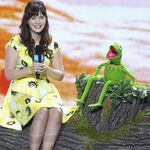 Deschanel with Kermit on WE Day
Add a photo to this gallery
Wikipedia has an article related to:
Zooey Deschanel
Retrieved from "https://muppet.fandom.com/wiki/Zooey_Deschanel?oldid=1265714"
Community content is available under CC-BY-SA unless otherwise noted.