Zoot is the balding, blue-haired saxophone player for the Electric Mayhem. According to his performer and builder Dave Goelz, "Zoot is just a fifty-year-old burnt-out musician."[1]

One of Zoot's trademarks is blowing small notes of music at a time. He notably blew the final note of "The Muppet Show Theme" in the closing credits on every episode of The Muppet Show (except episode 123), The Muppets Go Hollywood, and The Muppets: A Celebration of 30 Years. Although most of his appearances were with the Electric Mayhem, Zoot was more prominently featured as an individual in the early episodes, appearing with Juliet Prowse in a blackout in episode 101, and playing a reluctant duet with Mahna Mahna in "Sax and Violence" in episode 102.

Zoot was considerably more talkative during the show's first season, but he soon started speaking less, often expressing himself purely with music. Dave Goelz explained that "I found that when the writers gave Zoot lines to speak, I would always try to give them away to other characters because I didn't know what to do with him. Maybe that helped to define the character. Perhaps it's best that he's so non-verbal."[1] Thus, Zoot's proclivity towards speaking more in the earlier episodes may have been due to the fact that Jerry Nelson, who played Zoot's more animated bandmate Floyd, was not available for tapings of The Muppet Show’s first episodes. Zoot became much more talkative on The Muppets, often making candid but humorous observations.

Zoot is indicated to be Jewish in A Muppets Christmas: Letters to Santa, where Zoot wishes Kermit a happy Hanukkah when he and the rest of the Electric Mayhem arrive at the Christmas party, and in the extended DVD release, where he lights a Menorah.

Apart from his sax prowess and limited conversation, Zoot is rather spacy, having to be reminded of his own name and instrument by Floyd in The Muppet Movie. His personal habits and living situation sometimes appear to be sketchy. Near the ending of the "Bohemian Rhapsody" (Kermit's Commentary) video, Kermit finds Zoot in the phone booth. Kermit says he didn't hear him come in. Zoot replies, "Come in? I've been sleeping here for three months." The Great Muppet Caper reveals that he has only one pair of pants.

In the premiere of the 2015 series The Muppets, Zoot is strongly implied to be an alcoholic; told he's at a (writers) meeting, he stands up and introduces himself in the same fashion one does at an AA meeting.

Throughout the years, the Zoot puppet has been redesigned several times, his skin changing from gray to blue to green, the texture from exposed foam to fleece and back again, and his nose from green to yellow. Zoot's trademark shades (up until 2009), his bald spot, and his long, blue hair have always stayed with him, though. See Zoot Through the Years to track his changes. 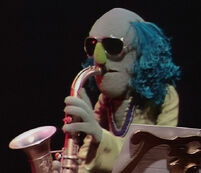 The original Zoot puppet is exposed foam, blueish-gray with a light green nose. 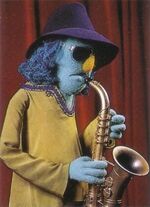 Zoot changes to blue fleece skin with a yellow-green nose. 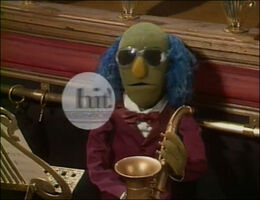 Zoot has changed to exposed foam green skin with a yellow nose. 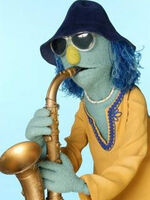 And lastly back to light blue fleece with a new yellow nose.

For the run of The Muppet Show, Zoot's musical "voice" was Frank Reedy. For The Muppet Movie, sax player David Garland performed the duties.